Wimbledon is now well into its second week, and with it we’ve been enjoying the annual dose of round-the-clock tennis coverage on TV, on radio and in the newspapers. A highlight of the British sporting summer, the Championships are one of the four Grand Slams of the tennis calendar – alongside the Australian, French and US Opens.

One of the main factors that makes these Grand Slam events so special – and elite tennis competitions in general – is that they are all played on different types of surface. Wimbledon is famous for its green grass courts, while the French Open is contested on red clay – the two surface types considered “natural”. Meanwhile, the Australian and US Opens are played on a synthetic surface – known generically as “acrylic” in the UK, but categorised by the International Tennis Federation simply as “hard courts”.

The varied types of playing surfaces aren’t limited to Grand Slams. Across the two main elite level tours (the ATP and WTA), the highest percentage of events – both indoor and outdoor – are played on acrylic surfaces, with a high number also played on clay courts. The grass court season is based around a small window in June and July – the northern hemisphere’s summer months.

But what about at the grassroots level? What are the most popular and common surfaces used for Britain’s 22,000 publicly accessible tennis courts – at clubs, public parks, schools and indoor centres? Why have they chosen a particular surface? Are there benefits to having a certain one?

We sat down with SAPCA’s Project Manager Colin Corline and put a number of questions to him, in order to learn more about tennis surfaces, the differences between them and to find out the latest standards when it comes to building a tennis court.

First of all, Wimbledon is synonymous with grass courts – but are there are other surfaces to be found at SW19 too? 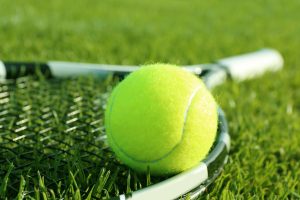 The All England Lawn Tennis and Croquet Club, the home of the Championships, is actually a private members’ club with a range of tennis court surfaces. Alongside the 18 tournament grass courts, the club has five indoor acrylic courts, eight American clay courts and two outdoor acrylic courts. There are also a further 22 grass courts located in the adjacent Aorangi Park, which are used as the practice courts for the Championships.

What are the different types of courts used at grassroots level in the UK – and which are the most popular?

The most widely used surface is porous asphalt (often known as macadam) which is a hard-wearing playing surface with a very uniform ball rebound and is the most cost-effective surface for tennis venues. Along with a lower capital cost of construction, the surface requires less maintenance than most other surface types and is popular with tennis clubs and community facilities, such as public parks. 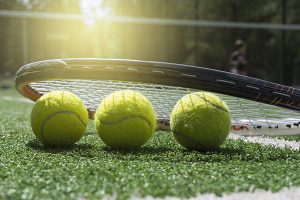 Another very popular surface at a club level is artificial grass, a surface typically comprising a tufted polymer yarn carpet, which is filled or dressed with sand to support the carpet pile. Generally, coloured green, the surface has a softer feel to a hard court and has a level of shock absorbency, making it a popular choice for adult players – the surface is often deemed “easier on the knees”. The surface is generally considered to be a medium to fast paced one, due to the ball interacting with the carpet yarn, which is supported by the sand infill/dressing. While the playing characteristics are different to natural grass, aesthetically players like the surface as it mimics grass.

Over the past 20 years artificial clay courts have gained in popularity as a surface designed to look and play like clay courts. Their makeup is similar to artificial grass – being a tufted polymer carpet – and are red in colour due to the red sand used as infill. Like artificial grass, artificial clay surfaces require regular maintenance, such as machine brushing, to maintain optimum performance. 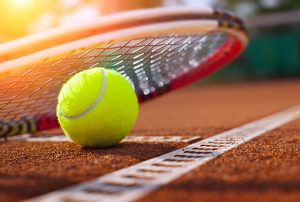 Artificial clay courts are also dragged-matted by the players on completion of matches, to ensure that the infill remains evenly spread across the court surface. When it comes to playing characteristics, they are considered to be a slow to medium pace surface, as the ball interacts with the infill sitting on the top of the carpet pile.

Other surfaces used in the UK include acrylic courts, a non-porous surface formed using acrylic layers applied to an impervious base, often with cushioning to offer a greater level of shock absorbency. Generally, in the UK, these courts are used indoors, but some outdoor courts exist. The surface is hard wearing and gives a very consistent ball response, which players and coaches enjoy. The level of maintenance is relatively low when compared to other surfaces. Due to the UK’s climate, there are far fewer outdoor acrylic courts than in other parts of the world – partly because any standing water needs to be removed with squeegees after prolonged rainfall. 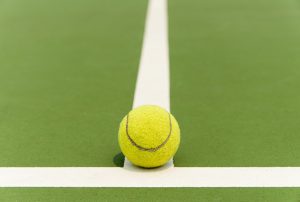 American clay courts have also been used in the UK for the past 30 years. Formed from a crushed stone, originating from the east coast of America, the courts have similar performance to traditional European clay, which is not often seen in the UK. Due to the surface’s cost, the required level of maintenance and the higher performance qualities, the products are often seen as a high-performance surface and hence the number of courts in the UK is relatively small.

Technical details of all the tennis surfaces mentioned above can be found within the SAPCA Code of Practice for the Construction and Maintenance of Tennis Courts.

What are the latest standards for tennis court design?

The SAPCA Code of Practice for the Construction and Maintenance of Tennis Courts has been considered the industry standard within the UK market since it was first published in 1999. Currently in its third edition, the Code was most recently updated in 2018 and has been written in conjunction with – and supported by – the Lawn Tennis Association (LTA).

The document offers technical guidance on the design, construction and maintenance of tennis courts and covers all elements of the facility development from court construction, floodlighting and fencing designs to maintenance regimes.

Using members of SAPCA’s Tennis Court Division for facility projects means the project will always be delivered according to these standards. This is because the companies within the Tennis Court Division are specialist contractors vetted by SAPCA who meet the required standards for tennis court design and construction.

Where could I get general information, if I’m considering a tennis court project?

There is a significant amount of information out there for existing and prospective tennis venues when it comes to developing facility projects. SAPCA can help with any technical information, primarily through the wide-ranging experience within our Tennis Division principal contractors – who specialise in the design and construction of tennis courts – and Professional Services Group, which also carry out work in this field. This technical experience, linked to the Code of Practice, gives prospective clients some fantastic technical support and gives them the confidence that the courts will be constructed in accordance with the minimum standards outlined in the Code.

SAPCA also has useful information on its website surrounding the “Project Journey”, which highlights information to consider when working through the development of a sports facility project. It offers guidance on the development of a project in a logical way, linking the process to key milestones and following the age-old adage “don’t run before you can walk”. You can browse the guides offered by SAPCA here.

As the national governing body for tennis in Great Britain, the LTA also offers a series of guidance notes on general tennis court facility development.

There is, and always has been, a strong working relationship between SAPCA and the LTA, with both parties supporting each other to promote best practice in tennis court design and project delivery.

For more information on SAPCA Tennis Court Division and Professional Services Group members, the Code of Practice – and information on the project journey – visit www.sapca.org.uk.

And what about funding – what financial help might be available for my project?

Finding funding for facility projects is, obviously, a crucial part of the process. Information on funding can be found on the SAPCA website, such as a list of funding agencies and the type of projects that they fund.

In the UK, the primary funding agencies for sports facility development are often the national governing bodies of sport – so in the case of tennis this is the LTA. Currently the LTA has a range of funding streams available, generally in the form of interest free loans. They also offer grant funding for specific project types.

Further information is available from the LTA here.

Other potential funders include:

Further information on funding can be found on the SAPCA website here.