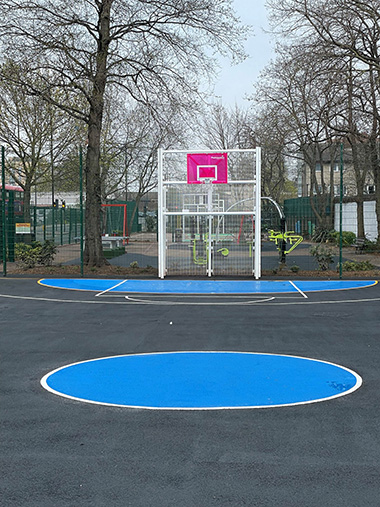 On the 10-year anniversary of the London 2012 Olympics, Playinnovation has helped transform an unused space into a thriving community hub in Newham, East London. Working together with local residents, Playinnovation completed an incredible refurbishment of two previously unusable ball courts and a central activity zone just a stone’s throw from the Olympic Village.

The new multi-activity ballcourt in Alma Street – which will be capable of hosting a number of sports and activities from football through to basketball and netball – is at the heart of the Greener Together initiative, a project designed to help tackle social and environmental inequalities through community action.

Greener Together is a partnership between local residents, environmental charity Hubbub, the Mayor of London, Ten Years’ Time and Afterparti. The pioneering, community-led project brings residents and local authorities together to take climate action and create a greener, healthier, and more connected neighbourhood.

The initiative – which was funded by Hubbub and the Mayor of London, with additional funding provided by Newham Council, Ecosia and Bloomberg Philanthropies as part of the Breathe London network – has given a voice to one of the most environmentally impacted communities in London, and is helping combat social isolation and anti-social behaviour.

Playinnovation founder, Marco Boi, said: “What a day. What a project. What a community.

“We have created a space in which all children and young people, regardless of age or ability, will feel confident to play sport, to be active and to exercise. By doing so, we are helping to tackle the social inequalities in the area by providing the community with a space for everyone to get physically active in.

“Working closely with the local community – as part of the Greener Together project – we’re proud to have contributed to something which has not only empowered the residents to create more green spaces for the community to enjoy, but has also helped them combat social isolation and anti-social behaviour.”

Rhiannon Ashley, Creative Partner at Hubbub added: “The Greener Together project has really demonstrated the power of people coming together to take climate action and shown that we can make a difference. Seeing the Alma Street residents working together to create a greener, healthier and more connected neighbourhood has been incredible and we hope it will inspire many more Londoners to engage with their community as well.”

What is Greener Together?

Greener Together is a partnership between residents of Alma Street and surrounding streets and four partner organisations Hubbub, Mayor of London, Ten Years’ Time and Afterparti.

It aims to tackle environmental inequalities in London by engaging lower-income Black, Asian and minority ethnic groups in addressing local environmental issues and their wider effects. The pilot project centred on Alma Street, St Pauls Drive, Simons Walk, Whitear Walk, Waddington Street and Waddington Road in Newham, east London, a neighbourhood that has been disproportionately affected by environmental issues including air pollution and lack of access to green space. These environmental injustices have been further highlighted by the Covid-19 pandemic.

The project is committed to genuine community partnership, with residents being actively involved in the design, delivery and decision-making www.greenertogether.co.uk.