The Sports and Play Construction Association (SAPCA) held its annual Conference at St. George’s Park – the FA’s national football centre – in late May. Featuring a number of high-profile speakers, the one-day event offered SAPCA members a diverse educational programme, as well as a number of networking opportunities.

This year’s event was also a special one for a number of reasons. Not only was it (due to the pandemic) the first to be held in more than two years, but it also marked the association’s 25th year of operation.

SAPCA’s and its members’ work to build an active nation – through designing, building and maintaining facilities, as well as delivering initiatives to improve standards in sports and play construction – is now recognised at the highest level.

In his message to conference delegates, sports minister Nigel Huddleston said: “SAPCA and its members have a really important part in the sports ecosystem and will play a key role in achieving the government’s goal of getting the nation more physically active.

“Celebrating your 25th anniversary is a significant landmark. I want to offer my congratulations to everyone at SAPCA and thank the association for all it does to help create opportunities for people across the country to enjoy physical activity.

“Through designing, building and maintaining the nation’s sports and play facilities, you and your members have the power to change people’s lives, young and old. I’m sure that you will continue to do so – helping people to build healthy, active lifestyles – for the next 25 years and beyond.”

While the work of SAPCA in the past 25 years was featured throughout the conference, there was also a heavy focus on the future and the association’s direction of travel. As part of this, delegates were given an insight into SAPCA’s future plans and key areas of work. These include the revamping of the SAPCA Quality System and the appointment of a new CEO, Richard Shaw, who replaces the retiring Chris Trickey.

Delegates also heard how SAPCA will drive to further strengthen its position as the respected technical competence standard and a mark of trustworthiness and quality. This will include an initiative on environmental sustainability, which will see all SAPCA members having to hold a recognised environmental certification for their business operations. Having minimum environmental standards will also become a requirement by which members are assessed for membership.

As part of SAPCA’s focus on sustainability, delegates heard from Dr Russell Seymour, CEO of The British Association for Sustainable Sport (BASIS). The session was delivered as part of an ongoing partnership between BASIS and SAPCA.

Seymour said there’s a huge opportunity to improve environmentally sustainable practices within sport – and sport can act as a trusted ambassador for sustainability. He also delivered a warning. “Climate change is already here, affecting hundreds of millions of people,” Seymour said. “And it’s impacting sports too – from damage to infrastructure through extreme weather, to disruption to events due to unbearable temperatures and deteriorating air quality, affecting players and fans.”

Other high-profile speakers during the day included Football Foundation CEO, Robert Sullivan, who expressed his desire to work together with SAPCA members, describing the “important relationship” between the foundation and SAPCA as “fundamental” to the foundation’s operations. 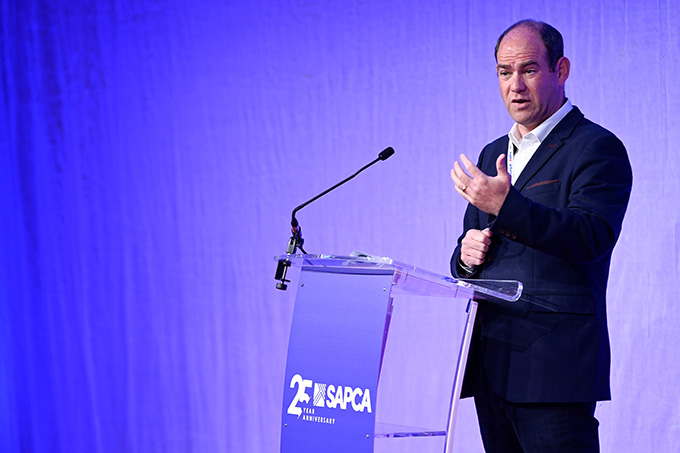 Sullivan also revealed that the foundation has some ambitious targets. “In the next two years, we will be a £100m+ foundation per year for the first time,” he revealed. “We have £325m of partner investment available. When we add the 30-40% of local match funding to that, it’s clear there’s a very big growth opportunity for us – and all of you in the room. Three-quarters of that investment will go into pitches, including 250 synthetic pitches and hub sites. It is a big shift in scale for us.”

Sullivan also said there would be a closer working relationship with SAPCA in the future. “We are flexible to innovation and to different ways of working,” he said. “We’ll work with SAPCA members to utilise your wider experience and our technical expertise – led by our head of technical, Chris Barry – and to identify the right way to do things for what our requirements are.”