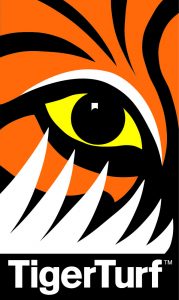 The SAPCA Open is supported by TigerTurf.

This year’s SAPCA Golf Day – supported by TigerTurf UK Ltd – has been declared a huge success after a record attendance both for the golf competition and the evening dinner.

A total of 108 golfers entered The SAPCA Open tournament – the 20th edition of the competition – held at the Forest of Arden Country Club on 23 June. They enjoyed glorious sunshine, tackling the magnificent but challenging Arden course, set amid ancient oaks, rolling hills and natural lakes.

The coveted trophy was taken home this year by the two-man team of Martin Laidler of Trocellen and Rick Thorley of Lano Sports, who amassed an impressive 73 Stableford points, to lead the field by a margin of six. Their victory brought to an end a winning run from James Gamble from Charles Lawrence Tennis Courts, who had won the competition in both 2018 (playing with his father Mark) and in 2019 (when partnered by Tony Aitchison from Replay Maintenance).

This year’s runners up were Paul Barker (SIS Pitches) and Robert Swatton (Fosse Contracts), on 67 points, with Gordon Thompson and Robert Stewart (Allsports Construction and Maintenance) in third with 60 points. Julian Westbrook and Mark Cullingford (Sport and Play) took the prize for fourth on 59 points.

There were four “speciality” holes this year, including the new Ron Harrod Foundation trophy for the nearest the pin competition, which was won by Sion Spencer of Proflex. Created to honour industry entrepreneur Ron Harrod, who passed away in December 2020, the trophy recognises the work of the Ron Harrod Foundation, which was set up to provide funding for aspiring sportsmen and women under 25, to help them compete at higher levels in their chosen sport.

James Gamble did not leave the event empty-handed, as he took the prize for the longest drive. The winner on the “nearest the pin in two” hole was Gordon Halliday, of Halliday Lighting.

To involve as many people as possible from the SAPCA community – including non-golfers – this year’s Golf Day featured a number of additional activities. A networking lunch arranged by the Women in SAPCA group attracted more than 30 members and guests, who heard the special guest speaker, Dr Rachel Malcolm – captain of the Scotland women’s rugby team – share her views and insight on leadership.

Those who felt their skills with a golf club might not yet warrant an entry to the SAPCA Open were given a lesson with the Forest of Arden club professional, Kevin Hale, and there was an opportunity to join Steve Woods, a golf hypnotist, for a free group session. For those wanting to explore the beautiful rolling countryside around the Marriott resort, there was a 45km group bike ride led by Simon Dowdy from England Hockey.

The day’s activities were followed by the evening dinner, which was attended by a record number of 140 members and guests. During the dinner, winners of the SAPCA Awards 2021 were presented with their certificates and prizes. Members also heard more about the Ron Harrod Foundation, and in memory of Ron Harrod the dinner guests raised £1,100 for the Alzheimer’s Society.

The record attendance at the golf day showed how eager people were to get back to meeting friends, colleagues and peers from across the industry, as well as guests from sports governing bodies, following the disruption of the past year.

At the dinner, the Golf Day chair Wayne Sexton, of S&C Slatter, expressed his delight, saying: “I’m grateful for so many SAPCA members and our guests for coming to support the event and making it such a great occasion.

“It has been a very welcome opportunity for SAPCA members to gather together and the huge turnout highlights how strong and engaged the SAPCA community really is. It was wonderful to see so many taking part after a tough year.

“My sincere thanks go to everyone who attended and I think I speak for everyone that the expanded format, with a number of other activities throughout the day, is here to stay. I’m already looking forward to the Golf Day in 2022!”

A selection of photographs from the day are shown below.